Building is booming in the South Pointe development.

BY NICHOLAS SAKELARIS
Special to the News-Mirror 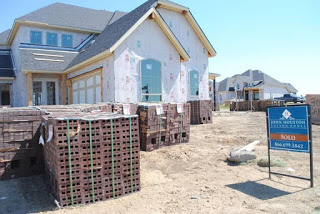 The first South Pointe homes could be ready for move-in by the end of September with hundreds more planned over the next few years.
In all, the first phase of South Pointe will have 290 homes with a second phase expected to bring another 153, said David Branch, director of land development for North Rock Real Estate. The homes are a mix of spec and sold lots.
The 870-acre master-planned community also includes 450 apartments, which will break ground this year, he said.
“We’ve had very good activity,” Branch said. “We’ve sold 20 homes in the last three months.”
South Pointe has been planned for more than a decade on the large swathe of undeveloped land bounded by U.S. 287 on the west and Texas 360 on the east.
With all these residents moving in to what was once farmland, the Mansfield school district is preparing for an influx of new students.
The district owns four school sites within South Pointe that could be potential elementary, intermediate or middle school sites.
There’s no timeline for these schools and they have yet to be placed on a bond program, said Jeff Brogden, associate superintendent of facilities and bond programs.
There are small portions of South Pointe right along Texas 360 that fall within the Midlothian school district, but the majority of the residential will be in Mansfield.
The Mansfield district also owns four potential school sites to the west around the M3 Ranch project. The M3 Ranch will have homes, apartments, shops and restaurants along South Main
Street and FM 917. M3 Ranch will break ground this fall on the first phase of 300 lots. The first model homes and amenities will start construction in the fall of 2017 and the first homes could be ready by spring 2018. The 800-acre project will ultimately have
1,600 homes plus retail, commercial and apartments. For the school district, that includes the long-talked-about sixth high school site near Flying L Lane.
The Mansfield district’s Facilities and Growth Planning
Committee started meeting this month to discuss the district’s future needs, Brogden said. The group will continue to meet into early 2017.
“The focus for new facilities would be in the southeast section of our district where we’re expected the most growth,” Brogden said.
Many in the city have dreamed of making a live, work and play community within South Pointe for many years. It wasn’t until construction started on the main lanes of Texas 360 that any real momentum started. South Pointe has retail space, primarily at the corner of Lone Star Parkway and 287, as does M3 Ranch.
“One of the biggest things is the all the activity on Highway 360 that progressing very aggressively,” Branch said. “It’s going to open up this entire corridor as far accessibility.”
Jobs are another driver for South Pointe, such as the $1.4 billion expansion of the General Motors Assembly Plant in Arlington,
Branch said. A bigger plant means more jobs and by 2017 the toll lanes on Texas 360 from just south of Green Oaks Boulevard to just north of the junction with U.S. 287 are scheduled to be completed.
The Texas 360 toll road is being built by the Texas Department of
Transportation and will be maintained by the North Texas
Tollway Authority. The frontage roads that drivers use today will remain toll free.